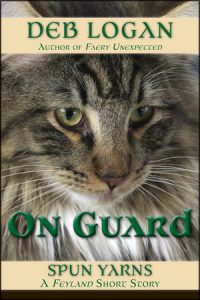 Mama was thrilled to meet Deb Logan at her first in person workshop in Oregon. It turns out the Ballacai knew her too, if you remember Brainball and Marilyn Monreow from the early blogging days. Anyway, the two have hung out when they both go to workshops and become friends.

The story in that Deb offered for the Fantastic Feline Heroes Bundle is one Mama loves. She’s a big fan of Anthea Sharp’s Feyland, which is the world this story is set in and “On Guard” is a lot of fun, because, well, cats!

Wallace, a fierce Norwegian Forest cat, has guarded the boy since he was an infant. Despite advancing age, Wallace isn’t about to shirk his duty now that the boy is old enough to play a dangerous game. Wallace doesn’t understand his boy’s fascination with Feyland, but he knows a threat when he sees one.

Deb currently has dogs, but she has had cats, one special one named Edie, and she loves her grand-cat, Wallace, who inspired the tale. You’ll be able to read more about them soon!