Hide Search
You are here: Home / The Latest With Chey / Author Annie Reed 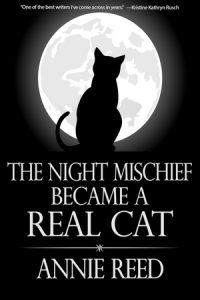 Mama also met Annie Reed at a writing conference. And Kris’ is right when she talks about how good of a writer Annie is!

Annie’s story in the bundle is “The Night Mischief Became a Real Cat”.

Here is a brief blurb:

Especially not on the night her wings fell off and she became a real cat.

She just wants to find a home where she belongs. Instead, Mischief runs into the biggest shadow creature she’s ever seen. A creature that can transform itself under the light of the full moon into something solid and dangerous and hungry.

Mischief comes from a long line of feline fey. Proud hunters who protect the world from shadow creatures who stalk the unwary. But Mischief’s no longer fey—she’s just a cat.

This isn’t Annie’s only cat related story. She has a story called “Life, With Cats” in an anthology called A Quiet Shelter.  It’s a charity anthology benefiting Friends of Homeless Animals rescue organization. Annie has a number of other cat stories, but she likes this one because the anthology benefits cats.

Here is a bit more about Annie:

Award-winning editor and author Kristine Kathryn Rusch describes Annie Reed as “one of the best writers I’ve come across in years.”

Annie’s one of the founding members of the innovative Uncollected Anthology, a quarterly series of themed urban fantasy stories that redefine the boundaries of urban and contemporary fantasy.

Annie’s short fiction has also been recognized by inclusion of her story “The Color of Guilt” in The Best Crime and Mystery Stories 2016. A frequent contributor to the Fiction River anthologies, Annie’s also thrilled to be a part of the relaunch of Pulphouse magazine. Annie’s recent work includes the superhero origin novella “Faster,” which can be found in Hiding Behind the Cowl, and the short urban fantasy novel Unbroken Familiar. Her other novels include Pretty Little Horses, Paper Bullets, A Death in Cumberland, and the upcoming Missing in Cumberland, as well as numerous other projects she can’t wait to get to.

For more information about Annie, including news about upcoming bundles and publications, go to www.annie-reed.com.

Annie has a cat named Lily and she’ll have her very own post!