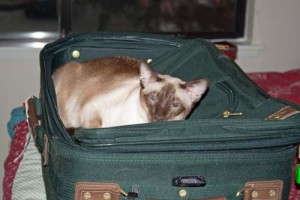 We moved by car which meant that it was going to take us more than one day to get there. We were going to be moving from Seattle to Charlotte at the beginning of February. This brought up a number of concerns.

First, I-90, the main route east, often gets a lot of snow at that time of the year. The Woman began watching the weather. She did not want to get stuck in a snow storm with three cats. She had her car winterized and checked over for driving. She began planning a route and where to stay based on how many miles she could travel.

Google maps and Pet’s Welcome were a huge help here.

The Male was going to be training in San Diego. He talked about coming back home to drive across the country with her so she wouldn’t have to do this alone. Then she thought, that’s silly. Why doesn’t she drive to San Diego and they could take the southern route which was far less likely to have snow during that time? So although it added a couple of days to her travel time, she did that. She didn’t actually get to San Diego. Instead they met up in Gallup, NM. The downside of this was that she had to drive through most of the really barren desert alone, something she hoped to avoid and she had to go one more day with having to handle us all on her own.

As you can see there were factors in her route planning that went beyond the shortest distance between two points. The travel time was long enough that the Woman figured she’d make it as easy as possible even if it did go longer.

First, she checked on the weather. In the spring or summer, the northern route would have been a no brainer, but in February it was iffy (although it turned out to be clear when she traveled).

Second, she wanted to have someone else around. Friends across country were more than happy to offer homes or help in case she got stuck in various places but nothing beat having an extra pair of hands to help out when she had to stop at night.

Consider your priorities! They will all be different.

After deciding on a route, she planned hotels. We’ll talk more about that in an upcoming post.