Hide Search
You are here: Home / Information / Moving: How Will You Travel? 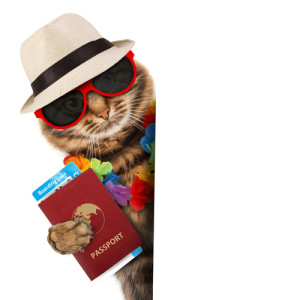 We’d like to thank some personal input from Waffles’ and Katie’s owner for talking with us about the differences between driving with a cat and flying with one. Waffles, being an easy going cat, traveled both by plane and by car by the time we were planning our move. The major issue, according to Waff and his person was the ability for Waffles to have control over his environment in the cat in a way he did not get to on a plane.

First, you can travel by car or plane or perhaps by train or bus. The two most common ways of traveling are by plane or by car. In moves that take less than a day to drive, we recommend traveling by car. There’s more control.

Longer moves can depend upon several factors, including if you would have to drive a car across country anyway, location of airports, personality of cats, comfort level of flying and how many pets you would have to transport on the aircraft.

First, traveling by air has the advantage of getting the move over with for the cat. I like this. On the other hand, there is less control. You are subject to very noisy spaces and can’t control the sorts of people and smells the cat will be exposed to. You will have to remove the cat from the carrier to go through security. You do not get a private room for this. The travel day may be long if you have to change planes and wait at another airport, not to mention the stress of worrying about the time if you miss a connection.

In addition to the stress of the airport, airlines typically have a limit on the number of in-cabin pets. Can you afford to make multiple trips?

One of our neighbors flew her cats to her new home. She was subject to a large number of people complaining to her about taking her cat on board because it would cause them a problem with their allergies. She said for her and her cats, that was the hardest part.

For us to travel by plane the woman said she’d need:

If you make that choice, be sure to understand whether you will need a health certificate.

Traveling by car gave her more control over our environment. While we weren’t allowed to sniff around and explore the environment like Waffles, we still had a much more protected area. Ichiro prefers to know where Gemini and I are at all times. He’s a busy body. That is one of the main reasons the woman put us all in one large carrier. It made him more comfortable. I was equally comfortable either way and she had an extra carrier if Gemini got pissed off with him. She did not. She seemed to like the company, which surprised us.

It did mean that the woman had to plan for hotels carefully and she mostly ate junk she could pick up through the drive through so she didn’t leave us in the car too long. It was a stressful week, but everyone made it. She made sure the car was well serviced, that we were in good health, and that she had reservations at hotels who knew she was traveling with cats all along the way.

In our next post, we will talk about how she picked hotels.