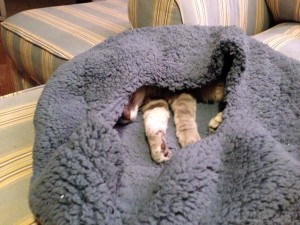 This was a bit harder than I thought it would be when Katie reported back that apparently her smarty pants were losing their smarty and she couldn’t find me.

However, Pierre, Ashton and Newton came by and said, “OMC, we know this one! That’s at the RDV Sportsplex in Maitland, FL. The head peep passes it every day on the way to work. Are you hiding in Florida from the snow, Chey?”

And yes, I was invited to Florida by the Truffle and Brulee who said, “We’re so happy Newton, Pierre and Ashton found you. Mom Paula saw that particular artwork when she was in Florida for the Capital One Bowl in January. She literally stopped the car and told her passengers, “I have to get a picture of this for Chey to visit.” Never know where Mom Paula will travel next . . .”

However, given how difficult it was to find, I am a bit worried that she doesn’t actually want me to be found. If she really wants me to come live with her, she really just has to ask. I’m quite low maintenance.