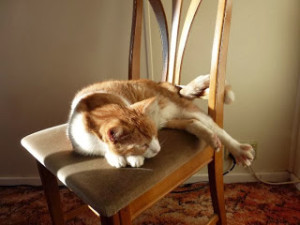 Well, after Smarty Pants Katie, Flynn is my next best guesser I think. Of course, he’s also full of ideas on where I should travel. This week, after searching quite hard for me. After many guesses, he said, “Is it Beaufort? The houses of York and Lancaster were united when Henry VII married Elizabeth of York. Henry VII’s mother was Margaret Beaufort……or am I on the wrong track?” No he was on the right track. I was in Beaufort.

Moments later he said, “I think you are at the Arsenal museum in Beaufort where the visitor centre is also housed.” And he was right!

And of course, Truffle and Brulee had invited me to see them so that’s why I was there. I think some folks may have gotten my hint when I said I was going to sit there and eat fishy flakes and Pralines… !

Derby and Ducky also got my hint about the Wars of Roses (I suggested that when cats were running all over South Carolina looking for me!) but they got there too late. It was probably all the cold. They were snowed in and couldn’t get there as fast!

Truffle and Brulee said, “Way to go Flynn! We’ve enjoyed our little visit with Chey again even if she is about 2 1/2 hours south of us! Beaufort is one of Mom Paula’s favorite places to visit in South Carolina.”

Yeah, but that kind of time is nothing to those of us who go off searching and traveling!

Oh and yes, we used that picture of Flynn because the Woman was squeeing all over that cute little foot stretched out. She just wants to grab it and kiss it and bother him! He’s lucky he’s not at our house!