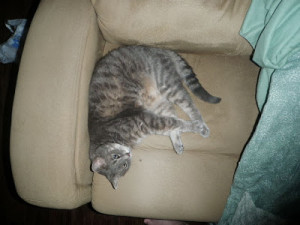 Well, I was barely getting worried about where I was when Prancer Pie came by and said, “Belem Castle in Lisbon Portugal?” Shocked though I was, I hadn’t even acknowledged him when Odin, Merlin, Domino and Gris Gris came by saying the same thing. Wow! Everyone found me.

Flynn, who said I should visit and I had to break out the catnip so we could all party! I had no idea that this was such a popular place to hang out!

Miles, Sammy, Billy and Nicky said, “well it’s a good thing that the smart kits were here early, because if you depend on us you would never be found. We are not worldly or anything like that – pretty much we’re stupid and like to hang out on the couch. which is fine – maybe someday you will be lost on our couch and we will find you!”. Maybe next week… you never know! I hear that these guys get French toast and stuff. Maybe I’d come and never leave!

I think Katie needs new help, “My smarty pants were at the cleaners. And Glogirly forgot to pick them up. Would you believe she actually FORGOT it was Chey Friday??? Something about it still being Thursday??? Sheesh, we’re lucky we even get fed on time around here.”