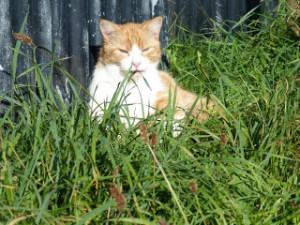 So I thought this would be a hard one, but Flynn is one smart cat. Cory, who I thought might get it thought I was in Hawaii but no, not even close. Flynn initially guessed the Oregon Coast Aquarium but that wasn’t it. Before I could tell him no, he said, “I’ve changed my mind. I now think it is a mural on Mo’s Restaurant at Otter Rock, Oregon.”And yes, he was.

I am at Mo’s Restaurant in Otter Rock having some fish and chips. Er… well maybe just fish. And as to those notes that Flynn said he was taking… you might want to keep the aquarium in them. That sounds like a nice fishy kind of place to. I bet a cat would never go hungry there!

Sadly, though, Mo’s at Otter Rock was closed for the season but the Woman did eat at Mo’s in Newport.