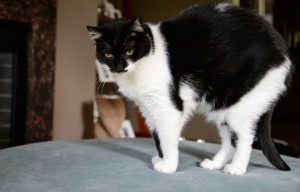 Katie came over and found me immediately saying, “The Yaquina Bay Lighthouse in Oregon?” She said she knew it so easily because, “Gloman is a lighthouse connoisseur.” So of course he knew.

Flynn and the Poupounette Gang also knew where I was. Flynn is quite smart to keep tabs on the Woman’s posts from Facebook because sometimes I follow her around.

Here I had hoped this would confuse folks a bit because there is Yaquina Bay Lighthouse and just up the road is Yaquina Head and the Yaquina Head is the more famous, although it was closed because it’s administrated by the Federal Government and not the state. Most of the lighthouses are administered by the state, or like Yaquina Bay by volunteers. However, no one was confused, but the reasons might be hidden in what Tillie and Georgia said.

Tillie and Georgia and the gang pointed out, “Is that the same place where Karla and Lapdaddy (Miss Peach )were married?” And yes it is. In fact, I remembered we had featured a picture from Miss Peach’s family about that lighthouse so I looked.

Back in November 2008, I was here once before. The pictures are similar but one is more sepia toned. Cory Cat was cat who got it back in 2008, although her human was a little slow this year. I guess after five years all our humans are slowing down…

It also reminded me that I started Find Chey Fridays in the spring of 2008 which means this has gone on for over 5 years. We have missed a number of weeks for vacations and such but when we’ve posted Fridays, this is what we’ve posted. Can you imagine? It seems like only yesterday. Our earliest posts start in 2006 and Gemini started back in 2005–which is a very long time ago when you think about it. Wow.