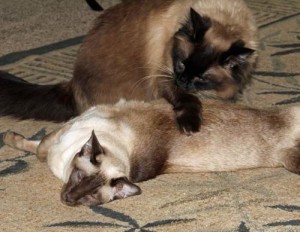 As you know, last week I ran a little contest to see who would be in the next book that Mom is writing. In her second book, Taken by the Sound she needed a name for a dog and she immediately decided upon Grete. So even though the editor tried to change the spelling to Greta, the woman said NO! So Grete makes a guest appearance and gives our hero a clue to the mystery!

So we thought we would put a cat friend in the next book. We ran a contest last week. We gave each comment a number and ran three random comment picks. As we were testing which one we liked, we figured then we’d do it once more to break the tie of who won, right? Well on EVERY SINGLE pick we got da tabbies o trout town! They wanted her to use the name Eric the Orange.  So in our third book, Eric may be a cat who gives a clue or maybe he just makes a comment to one of the other characters (or about them). It was apparently meant that Eric was the cat chosen for the book as you can see.

Now clearly I have some work to do on washing my paw. It’s good of Chey to give me a place to set it while I do that.