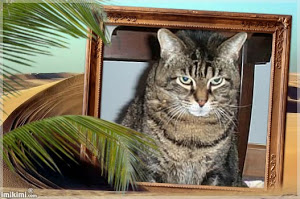 If figures that they would know where to catch trout, don’t you think? It’s actually the Ha’penny Bridge in Ireland. And I thought many of my friends my recognize it. I have to admit, I’m not much for fishing so I had a Guinness.

No, Cory, I don’t think there is any troubled water there. Probably because there is Guinness.

And many thanks to Flynn’s folks for sharing all their photos. I mean, if they’re going to leave him with a sitter, I think it’s the least they can do so he and I can check things out after they’ve gone.  Now for a bit of dinner. Who would like to join me?

And to all the Daddy Cats out there, Happy Father’s Day!