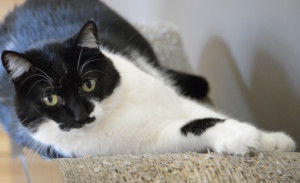 Well I thought this would be a bit difficult but Katie came by and said, “Our Lady of Peace Chapel!!!!!!!!!!! (“Nossa Senhora da Paz”) Villa Franca do Campo. Sao Miguel Island, Azores Islands in Portugal : ) No, Waffles did NOT help with this. ; ) Katie”

And she was mostly right. As Kaika correctly pointed out, “But the Azores aren’t actually in Portugal. They are in the middle of the North Atlantic Ocean. The human’s family came from the Azores, Sao Miguel, actually.”

Flynn, who is the voice on this as it is his family who allowed me to use the image and suggested I might want to go there for an exotic weekend, said, “Wow Katie was quick!. To be accurate, The Azores aren’t in Portugal as ‘Kaika said but are an autonomous region of Portugal.”

Now, that we all know about the Azores, let’s go party. And Flynn and Katie are the guests of honor because like I’d never have gone here if it weren’t for my bud you know… And for the record Katie, I don’t think anyone thought that Waffles would know that one…