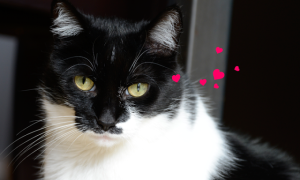 Here I was lying down to take a take a nap because I thought it would be awhile but who showed up almost immediately?  Katie!  She said, “Are you in Greece? More specifically, Achilleion (Corfu) The sculpture is the Achilleas thniskon in the gardens of the Achilleion.?? Katie (Waffles Too was NO help)”

And she was right.  That meant opening an eye or two to know where I was already.  And to wonder if there was good fish in Greece?

Eric and Flynn were impressed.  They were the cats who suggested I go there.  They were kind enough to let me know where to go and to get here with this large statue.  Isn’t it cool? And with my friend Eric rather under the weather too!   How fine of him is that?  Have you gone to visit them and made sure he’s doing okay too?  I have been having large rumbly purrs on the Woman’s lap for him.

And Katie, PSST. I’m concerned at how far back I had to go in your blog to find a photo of ONLY you… Just saying. Watch out for that little boy cat. They take over EVERYTHING.