Hide Search
You are here: Home / The Latest With Chey / Talking Tabby Tuesday 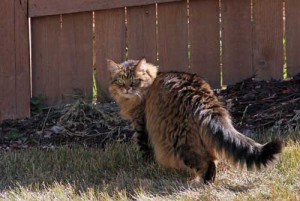 Losing friends to the Rainbow Bridge isn’t the only thing that’s been going on.  There has been some other drama, which many of you caught on the Cat Blogosphere.  Mama moved around a lot as a child (not a military brat) and so understands what it feels like to be an outsider.  She feels for anyone who feels left out and forgotten as she knows what it is to be left out.  So we were sad to hear that someone felt that way in the CB.   We’ve felt that way too.  It is not anyone’s fault, really when you look back objectively. And Truffle and Brulee’s mom said something really meaningful.  Why are you blogging?  And do you still want to blog for those reasons or are there other reasons?

It’s easy to see that some blogs get lots of comments.  Some get fewer.  There are lots of reasons for that.  We have some blogs that we really like that don’t get as many comments.  Because we wanted to get more comments we used to visit everyone who posted every day in our reader.  We don’t have the time to do that any more. It’s not that we don’t like our friends, but because our lives have changed.

Some of our best friends have left the blogosphere. Some for temporary reasons, others permanently.  We miss them.  Some of these people we keep in contact with via Facebook.  Others have just gone.  We miss them.

There are always different connections.  We hate it that we often feel the outsider and left out. It is who we are.  We’re not as loud. We’re shyer. We tend to think that what we have to say isn’t as important so we don’t get involved.  In the last couple of years, we haven’t had the funds to get involved.  If we don’t bid on all the auctions, it’s because we don’t have the discretionary income to do so.   We also don’t always have things to donate.  We’ve done it in the past but our lives are different now.  Technology is different.

Why did we start blogging?  We started my blog, Gemini’s blog on blogger because Mama wanted to write every day. She always loved writing and decided she’d see if she had what it takes to write daily for awhile.  She is still doing it.  In fact, she has moved on to writing books and short stories which she hopes to self publish soon.  We have one short acupuncture book ready to go to an editor (but as she’s a new mom at Christmas she will read after the holidays).  We have a pretty final edit on one of our novels and move that onto a professional editor to get it proofed and published. We hope to have that up by March (although that timing is iffy).

As for Chey, we started her blog because the original My Siamese was an affiliate site back in the day when you could make money on affiliates.  We’ve made a few hundred dollars from that but affiliate sites are no longer really lucrative unless you’re selling bigger ticket or repeat ticket items.  We changed the focus to our art which isn’t exactly getting traction.  Maybe the cat bloggers aren’t the target.  Or maybe it just takes more time.  At any rate, Mama is more comfortable with writing.  That doesn’t mean no artwork, but it’s not a main focus.

In essence, all our reasons for blogging have changed.  We don’t intend to just stop. We have found community here even if sometimes we feel a bit on the edge.  However, we do like writing about cats and taking pictures and participating in the blogging community and not just on Facebook.  However, as we re evaluate we figure we won’t have the time to devote to this that we always did.  We’ll probably keep posting mostly regularly for awhile.  But if we slack off, we’ll it’s not cause we disappeared or anything, it’s cause we have other things. Many of you will follow that on Facebook.  Some might follow us to other blogs.  And yes, we will post those links as they become important to us.

However, I think it’s important that everyone remember that when you have a large community there will be those people who do feel left out of things.  It may not be intended personally but there are always people who end up being the focus of the group and others who feel more like hangers on.  It’s kind of like life.  For those who feel left out, there are always times when some people feel left out.  We can’t go back to being the community we were.  Community is not a static thing.  Communities are dynamic.  That means they change.  If we don’t change with it, we might find that the community is no longer for us and that’s okay.  Others will fill the space we filled and we’ll go on to fill that space elsewhere.  That’s what life is.  Change.  We hope that if we learn nothing else from the drama we can learn that and be accepting of where people are and understanding that things are not personal.

Now. I have a personal visit for my handsome Ping.