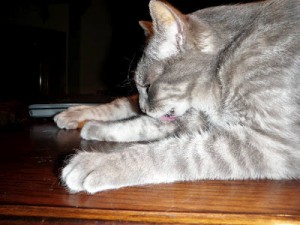 Well the fact that the artwork I was standing in front of was supposed to be a Babe Ruth (and a Yankee) made it a challenge for many cats who thought I was on the East Coast.  However, Prancer Pie was not fooled, “Sebastapol.”  Yup, in California (which was in the next comment)!  There are tons of these types of statues around the town.  We saw a lot of them (and I have more).

We found this on the Roadside America website as far as places to visit when we went to California.   It seems a few cats don’t like the Yankees–well all I can say is that if I’m partial to them it’s only because the Male doesn’t like them either!  And you know I can’t have anything in common with HIM.  Of course, he’s happy because he’s from Cincinnati and the Reds are in the playoffs.

Eric and Flynn had a great answer too, “We were going to say Jeter Harris’ garden but it looks like Prancer Pie has got it.”

Now I’m going to go spend my weekend doing what Prancer Pie is doing right there in that photo–and napping. There’s always a good nap, isn’t there?