Hide Search
You are here: Home / The Latest With Chey / Retrospective: Voting Scandal 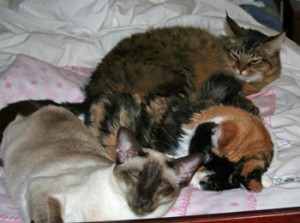 Zeus, one of our favorite cat bloggers back in 2007 had a beauty contest.  Chey was pleased to be crowned Miss Litterbox.  Mr. Litterbox, however got rather ugly in the voting.  Someone did comment that Chey shouldn’t be eligible as she was a purebred but other than that comments stayed clean.  Mr. Litterbox had friends of friends making nasty comments about the other candidates.  It was not one of the cat blogosphere’s finest hours.

At any rate, Chey was interviewed a number of times about the voting problems surrounding Mr. Litterbox.  Here is her article in March 2007

I have to admit that over the last 24 hours I have been defending our right to potentially vote to all my human feline voting rights supporters. Russ Feingold called early Friday morning, waking me from a beauty sleep but you know, he’s on a different time table than I am. He said his aids were urging him to withdraw his support from feline voting rights after an incident of feline voting online. I had read Zeus’ blog and unfortunately I knew what he was talking about. I sighed. It was going to be a very long day.

I ended up speaking to most of my supporters and had an interview on the Ed Schultzshow. Ed took me a part! I love Ed, but he doesn’t go for this. I pointed out that we were allowed to stuff the ballot box. As Ed said in his interview, why were cats claiming that other cats were changing votes already registered. Isn’t this just the sort of thing we’re fighting against when it comes to fair and transparent elections?

I replied that I had no idea what exactly transpired but I have aids looking into this (although Gemini fell asleep three minutes into her search). I said that this was a horrible thing. If ballot stuffing was going to be allowed (and it was) then votes should not have been changed as there would always be more ballots. If time was of the essence then they should learn from the experience and start stuffing sooner.

“Chey, I’ve heard a lot of nasty accusations about this voting thing. People were claiming it was just a big popularity contest. What do you make of that?”

Ed continued to press as only Ed can. “But Chey, doesn’t this set back your campaign to get feline voting rights before 2008?”

I had to reply that it did.

“And what exactly does that mean for your campaign?”

I sighed. “It means that humans must realize that all their silly machinations mean that many cats have been influenced are probably no more suited to governing than the humans themselves. It does not mean that I am not suited to leadership. I will just have to work harder on my human supporters.”

“Yes, but don’t you have to be registered to vote to be able to run for office?”

“Ah…you know I have a bunch of damage control to do right now Ed. Gotta go Buddy!”

I convinced my congressional supporters that this was not a political election but a beauty pageant and they all understood how cut throat those are. I convinced them that ballot stuffing was allowed! I convinced them with the proper voting instructions as set up by the US government, cats could exercise good judgement. Now, my supporters just need to convince the rest of Congress

Of course the day wasn’t over yet. I was relaxing on my humans legs as she watched Real Time with Bill Maher. New Rules Came On… There it was the front page of Zeus Excuse. I knew we were in trouble.

“New Rule. No feline ballot stuffing. We realize that this was allowed in Mr. Litterbox, but it’s not allowed in the Presidential election. One cat one vote. And they better be for Cheysuli.”

Thanks Bill… I think.