Hide Search
You are here: Home / The Latest With Chey / Tuesday Debates 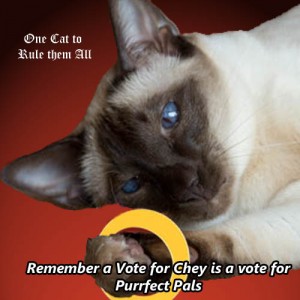 In the debates today everyone is talking  about cats versus dogs and whether a cat qualified to rule the world.  I can’t imagine a sillier question.  After all, who is more qualified? There’s this sort of specist thing that we might have to chose between dogs and cats or some strange idea that dogs maybe more qualified (as if).  Let’s face it, cats have been ruling the world for centuries and we aren’t about to stop now.

Yes, dogs have their place.  People love them.  They distract humans so that we can get the work done behind the scenes that humans may not want done.  Who else but a dog could fetch slippers?  Who else but a dog would love a human unconditionally even when they go away for weeks at a time? Who else would want to do search and rescue? So, for those who think I’m specist because I’m a cat, let me be purrfectly clear. Dogs have a place.  They just don’t rule.  They try far too hard to get praise which is why you have canine obedience courses but no one ever set  that up for a cat.

As a cat, I take time to see all sides of the issues.  I would never just go outside and not demand to come right back in. I’m testing out all sides of that door to see if it’s worthy of my attention.  Just as I might love a food for weeks on end only to eat something else.  I need to test everything. I’m a cat.

I know that some think I’m lazy. There are hundreds of images of me apparently sleeping but what I’m really doing is considering this issues. I’m a thoughtful cat. If napping looks a little like thinking, is that really my fault?  However, don’t think I can’t take action. Show me a feather toy, a string toy or a vacuum cleaner and you’ll be amazed at how fast I can take action.

Answers provided by the Campaign to Elect Chey Ruler of the World.  One Cat to Rule Them All!