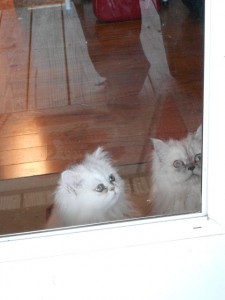 So there I was, exploring the world that Pixel and Samba recommended.  I was quite comfy in the lap of Neptune and along comes Truffle and Bruleeand immediately they say, “We think you traveled across the pond for this one, Chey. Are you resting on the Neptune Statue in Versailles Gardens in France?  Truffle and Brulee”

Now Pixel and Samba were impressed because their humans took the shot of Neptune and didn’t know if he had a name or not!  But yes, I was in Versailles.  I mean, where else would I feel so at home?   I decided to hop down to the Chans who said, “Hey Chey! come over and play. We think you’re only about one and a half hours away from our house, in the gardens of Versailles!” So it was a grand weekend over all!

Now how can I get the Woman to purchase Versailles for me?