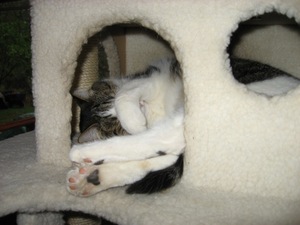 Yes, I have been here before. In fact when ‘Kaika found me he said, “Are you in Petersburg, Alaska, at the end of the road again?” And yep–that’s where I was.  At least this time you guys had a clue!

Eric and Flynn had a sense of deja vu–and they were right.  The Woman realized after she put this up that I had been here before.  It’s not like there aren’t thousands of other places and my friends, Pixel and Samba have told me about lots of them, that I can’t go elsewhere!  The Woman is a lazy travel agent with a poor memory!  Even Whitey  who is all buggery (but getting better–seriously), remembered!

Cory sounds like she would get lost as well as I do as she remembered the photo but couldn’t remember where I was.  Maybe there should be a Find Cory post?