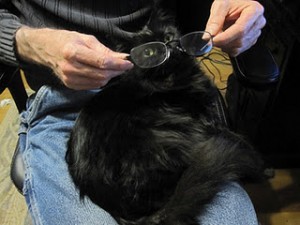 Cory Cat stepped right up and quickly found me. That was a relief as it was a really rainy weekend and the sun on my belleh was making it a little wet.  Okay that is a Pacific Northwest joke… Cory said, “OMC! Your on the 1-5 Bridge over the Columbia River in between Portland and Vancouver.”    Fortunately no one raised the bridge while I was stretching like that either!

The Woman was down in that area again this last weekend but she did not go over that Bridge.  But she was there for a memorial for her friend who just did cross the bridge.  It was a lovely memorial.  The aunt of the Woman’s friend said, “Oh you’re Bonnie. You had Simone.  She talked about Simone all the time.” Simone was the Siamese who came before.  The Woman had to laugh that her friend talked about her cat so much to her family that they all remembered!