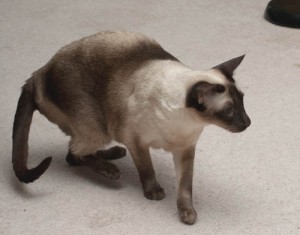 Cheysuli, the socialist head of the group Critters for Total World Domination, is contemplating a run for the Republican nomination.  Given that she is for universal healthcare and breaking up the military industrial complex, we asked Cheysuli why she thought she could get such a nomination.  “Ike was for those things,” Chey replied, referring to Dwight D. Eisenhower who was president in the last century and a Republican.

Chey points out that like Lincoln, another famous Republican she is also against slavery.

She does favor raising taxes, the right of a woman to chose and marriage equality.  Further, rather than worshiping in a Christian Church, Chey worships at a mirror, purported to be, by a source named only as Mao (not like Chairman), a very LARGE mirror.  Chey answers these concerns by saying, “Well I’m not Mitt Romney.”