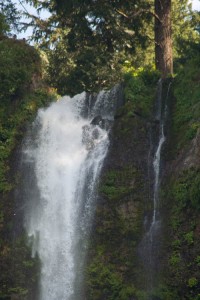 A shout out to ‘Kaika, Cody and Gracie and Cory for finding me at Multnomah Falls just outside of Portland, Oregon.   We’ve posted another photo not only because it’s beautiful but because today we want to tribute more than just our good friends who have found me when I am lost (again).  At any rate, as the rest of the post is more about human stuff I’ll let the Woman write…  The rest of you can nap to the lovely sounds of the water falls, which is just about half an hour to 45 minutes outside Portland (depending upon how you define outside Portland!).

This past week the blogosphere lost Beau’s Mom.   We didn’t know her well.   Cathy was always friendly online and on Facebook.   We read the other tributes and were struck by how much she reached out to different bloggers.  Re-reading what she wrote about Beau’s legacy we have to wonder about hers.   It probably isn’t the beautifully written sermons but rather her interest in each and every person and cat in the blogosphere and taking note of who was worried or sad or needed a shoulder and reaching out to them and offering them a place to be heard.    It wasn’t her writing or her work that ends up as her legacy, but herself.  It really makes us think how much more of ourselves can we be so that we can hope to have the same kind of community legacy?

Today, of course, is the tenth anniversary of 9/11.   There is little to say as everyone remembers where they were in the same way my parent’s generation knew where they were when Kennedy died and when Pearl Harbor was bombed.   Those across the ocean from us probably have the same memories of the day Hiroshima was bombed.   There will always be terrorists.   Our challenge is to live well despite them.  I ran on for awhile with this tribute and decided it was too much.  Cheysuli is never that serious and it’s hard to snark when you are being thoughtful. So I’ll leave you with a quote from my favorite snark (other than Chey), Kurt Vonnegut, “There are plenty of good reasons for fighting, but no good reason ever to hate without reservation, to imagine that God Almighty Himself hates with you, too.”   This was from Mother Night written in 1961.   Maybe some day, we’ll listen.