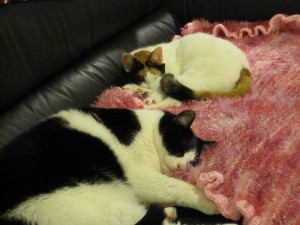 Wow!  This was a hard one.  I was found in Rome pretty quickly.  Sophia and the Meezers got that right off but they were not in the right place.  Pixel and Samba invited me over to the Balbi Crypt in Rome.   It is a fascinating place.

Anyway, I’m giving this too Cody and Gracie as the closest cats.  They found a photo that they thought looked like where I was but they said, “Underneath the Church of San Lorenzo in Lucina?”  I wasn’t there but it is at the beginning of the tour where you find this Crypt at the end!  I did not know that or I could have given a better clue when they guessed that.

Even with hints no one got it.  They warned me I might be there for the duration and I said, sometimes it’s good to challenge kitties.  I think I have had only a couple of places were I have not been found so this is one of those times!  Still I liked the look of the place.  Isn’t it cool?

So Samba and Pixel told me it would be  a tough one for you guys but I was hoping you all would come through anyway!  I’ll have to find something a wee bit easier for next time.   Of course this way I got miss out on all the cleaning and packing that went on in preparation for the cleaning and staging next week.