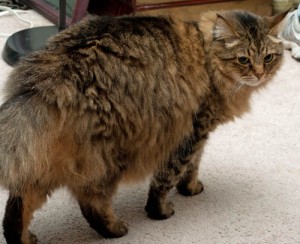 “Momma,” I said, “Aren’t I supposed to be writing about Meowism some more?”

And Momma said “Gemini if you want to write about Meowism you can, but you do not have to.”

And I thought, I could write about Meowism. There are some good things in it.  But why should I write about something for Cheysuli when I can write about me? And then I realized I did not know what to write about me! Momma was gone this weekend so I was very stressed out.   I am watching Ichiro in this photo to be sure he does not pounce on me. I have a big hiss when he does.

Momma is thinking about moving Chey to the main site, so at some point we will be moving our rss feed to mysiamese.com.  Momma thinks she will keep both for awhile and then move to just the mysiamese.com.   Traffic is not what it was and she is not really making anything from her affiliate networks.  She is actually thinking about just letting the whole mysiamese site disappear rather than renewing the name. She says Chey can participate just by being on facebook!  But I said I am not on facebook and Momma said I would have to share Chey’s page!  Anyway, Momma is feeling particularly discouraged as she always wanted to be a writer but apparently she is not good enough to write anything of any interest.