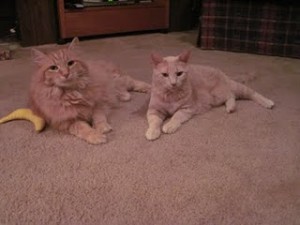 After quite a long time napping on my rock, with much help and clues, Simba found me!   Simba said, “As Molly and Co suggest, are you near Boone NC, or maybe Blowing Rock, NC? Some sort of lookout that people could walk to from their car?”

And yes, he was quite right.  I am in Blowing Rock, NC.  It’s sort of a lookout where they have the big “blowing rock” up there.  There’s a little tourist center and a path through the blowing rocks that you can see them up close out and also check out the view from up there.   It’s rather interesting.

I think as Simba said, he had help from Molly, Shadow, Mooch and Trooder and also Angel Praline as they guessed areas around there.

Cory was in rare form this week, suggesting that I was a Rock Star and singing a lovely song (that you can see in the comments) to the tune of on “Top of Old Smokey”.  I’d print it but there was a disturbing part about me having nothing in my dish.

Derby and Ducky thought I was between a rock and hard place and if no one had found me, I would have been!