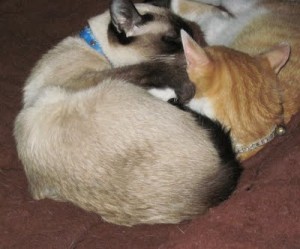 I was quickly found my Ayla, Iza and Marley who said, “Got it. Famous pinecone statue (created in the 1st century) in the courtyard of the Vatican Museum.”  They also searched ugly buildings…  Which I am rather insulted.   Pixel and Samba gave me so many choices about where to go and I choose this because of the lovely grass and the recognizable pineapple!

Eric and Flynn said, “Oh no, we are too late. We knew that one because mum has been on a tour to The Vatican City when she was on a Med. cruise. It used to be a fountain and was sculpted in bronze in the 1st century. She thinks it was not in the main St. Peter’s Square but is beside The Vatican library and was originally part of a larger courtyard. She can’t be sure she is right about the larger courtyard so she is off to google it..”  and then

Eric and Flynn added, “We are back! The Court of the Pine (Pigna) is part of the Belvedere Court. She copied the text for anyone interested.

Derby and Ducky said, “If you read on you will find that at least in the “old” days this was the site of the papal menagerie, from Wikipedia.

Shortly after, the court was home to the papal menagerie. It was on the lower part of the courtyard that Pope Leo X would parade his prized elephant Hanno for adoring crowds to see. Because of the pachyderm’s glorious history he was buried in the Cortile del Belvedere.  So a good place if you want to hang out with deaded and buried elephants.”

I think you pretty much know everything you ever wanted to know about the Belvedere Court!   And it was a lovely place to hang out for  day or so too.  Oh and, no I am not joining a nunnery. I was hoping to be Pope, but apparently I have to human, male and Catholic–which I think is rather picky of them.  As I fit none of those, I shall have to hope for saint hood.