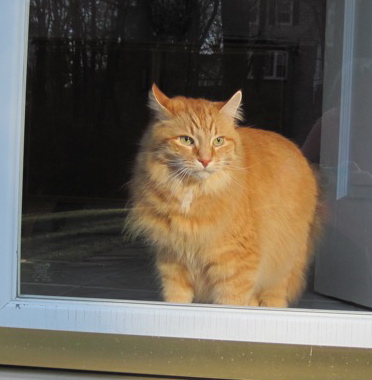 Okay after much guessing and no one getting it I started giving little hints and Simba was the first to say I was at the Zoo, however I must say that not 10 minutes later Ayla, Iza and Marley became the most specifically correct by saying, “It appears to be the Nina Njaa Marketplace at in the African Village at Woodland Park Zoo. That is Jaime standing out front…” of course we have to wonder if they had a little help from their friends or did they really know that was Woodland Park Zoo?

Artemesia, Fenris, Socks and Scylla just before them said, “We meant to say the African Village at Woodland Park Zoo since it is a big place.”

Many cats were guessing different places around the United States but these cats finally honed in on where I was, although Simba was taking the long tour route of Seattle before finding me.  As it was I had a hard time deciding who was most right as I am not sure who would have gotten what without help from those who went before so they are all Sunday Guest Stars.  We liked the name of Simba’s photo best…