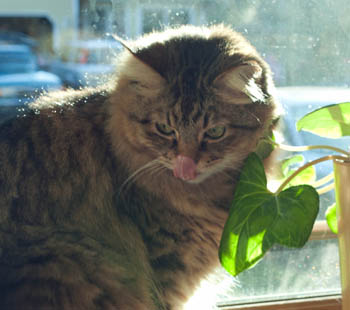 I can’t believe that Ichiro is making me talk about his stuff.  He really is a self centered little cat. He is such a piglet and takes up so much space that I do not eat unless he is locked up. Momma feeds me first cause I am a little cat and she worries about me and my weight.

Anyway, Momma is thinking he should get entered in prettiest eyes (and apparently everyone agrees), softest fur (except for mine but he really is silky soft) and something you don’t see super much on the photos is biggest feet!  He has enormous kitty feets.  Momma laughs at him because he has such big feet.  More original tail used to be floofiest tail, which would have been me but I do not think that I would like to be in a show. Momma isn’t sure Ichiro will like it either so she doesn’t think he would show off for Mr. Personality.

Well, now I am going to go have a little bath.