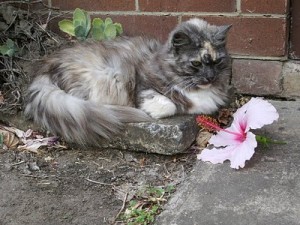 Well shortly after I was out and about Momo came by and said, “Alaska, Glacier Bay. ? Hubbard Glacier. That’s about as close as I can get.Come back and warm your butt, Chey!” and one of those answers was correct!  Alaska of course, as several cats got but also Hubbard Glacier.

Simba said, “Ah, ha! I think maybe it is Disenchantment Bay and Hubbard Glacier? Since you said only Momo was right. And my humans didn’t go there.” Eric and Flynn also said, “Mum has had chance to look at her photos now and agrees with Momo that it does look like the Hubbard Glacier. In her album she has put it down as being in Disenchantment Bay but she has put Yakutat Bay in brackets beside it and can’t remember why. Maybe one is part of the other bay, or maybe they are alternate names for it. She’s probably wrong anyway.”

And yes they are all right!  Good for them.

None of you were fooled that I was in Wiskerconsin although several of you said it looked a bit like your backyard!  Boy was I glad lots of you found me so that I did not have to freeze my toesies off for long!

The Woman is getting low on creative photos and would love it if someone has any suggestions and photos they want to send me. Photos must be by your human (or you if you have your own camera) so that we can use them with permission. Also, please let the Woman know where I will be going as she is not very good at this game!