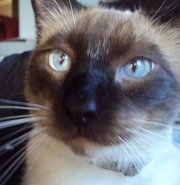 Tink (a cat who knows me from Facebook) said, “Officer’s Row in Vancouver, WA?”  and that was an excellent guess as that is where I am.   Just to help out a little, ‘Kaika came by and said, “Is it the Gen. O. O. Howard House?” and it is.  Molly, Shadow and Trooder said, “Fanks fer da hint of Officers Row – we had to google dat – we fink its General O.O. Howard House. But we hasn’t a clue acuz dey look da same to us.”  So everyone got something right here!  Chathu knew I was close to Portland but ultimately guessed a different house (but we had to look that up to make sure).

Cory Cat, of course, knew where I was and was waiting just down the street at the Grant House with some nip tinis and cheese.  While Cory thought we might eat there, the Woman remembers quite liking having a late lunch at the Marshall House many years ago and she tells me I must try the Grant House now.

Officers Row in Vancouver, WA is part of the old Fort Vancouver Historic site.   Officers Row is of course where the officers lived with their families when they were stationed there.    It is an historic street that has been renovated. Many of the houses are now apartments and small businesses.  The Grant House houses a restaurant and the Marshall House is now rented out for Social Functions.  The Howard House is on the west end of Officer’s Row and has the Visitor’s Center.

Pearson Air Museum is also part of the Fort Vancouver Site and is quite a nice little museum.  The owner spent a great deal of time talking with my Grandfather (on the Woman’s side) about being a naval pilot.   On the week day it was fairly quiet so it gave them a lot of time to chat and hear a lot about the history of the museum.