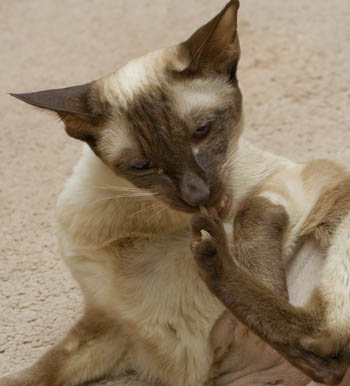 Cheysuli has kindly allowed me to take over her blog to tell the people asking about the Animal Communicator.   I went to see Polly Klein at Tonglen Healing Arts.  Chey and I were able to visit in person but she does do remote sessions.

When I made the appointment she emailed me an intake form and asked me to send it before I came.  Part of that included questions I wanted to ask Cheysuli.  When we arrived for our appointment, she met Chey and I at the door.  I sat and chatted with her initially.  Chey was allowed out to explore the office, which included a bathroom area.  Chey hid behind the toilet.   Polly talked to me about what I called Chey about our life a little more completely.   Also she clarified questions I had for Chey, so she asked the right thing.  For instance, I asked her what she liked to eat.   Polly wanted to clarify if that was a flavor or if I were thinking of dry or canned food.

Then she settled in to talk to Chey.  I went to use the restroom.   Chey immediately started to squeak a bit and then she followed me out of the bathroom and explored a bit more.  Polly told me at the end of the session, when we talked again that she had talked to Chey about what this place was and told her that it was a safe place for all animals.  It was safe for her to come out.  Chey wanted to know what went on there and Polly explained that it was so they could talk and then she would let me know what they talked about.

Cheysuli was quite worried that Ichiro is here for me–she is worried he will take part of my attention away from her.  She was much appreciative to learn that he is there for my husband. Unsurprisingly, she thinks my husband is beneath her and so is Ichiro, so that is good for them to be “for” each other!  Her illness seems to be all stress related and Polly could feel all of that even when they talked about Ichiro.  I found it interesting that when Cheysuli was asked about Georgia (in case she didn’t want to bond for fear of that loss) her response was, “He is NOT my Georgia.”  Gemini is separate but equal with her and there didn’t seem to be any ownership there.

We are using a Vi Miere flower remedy called family for use when there are family issues.  This is a non alcohol based flower essence that you spray in the air above the pet or on your hands and then rub them together and rub the cat.   I do not know that this is working greatly but I think Cheysuli is getting more relaxed–although she still seems to want to fight Ichiro.

I asked if Chey had anything else she wanted me to know.   She asked Polly what I did when I went away during the day.   Polly had to ask me what I did and she explained to Cheysuli and Chey seemed satisfied by that.  She said she doesn’t worry that I won’t come home when I go away–she is very secure in that.  Her big issue is that Ichiro is in her territory and she does not wish to share me.  But she might be willing to accept that he is there for my husband(those lower creatures!).  She doesn’t particularly like my husband because he takes my attention from her sometimes, but she realizes he is not going anywhere and she can live with that.