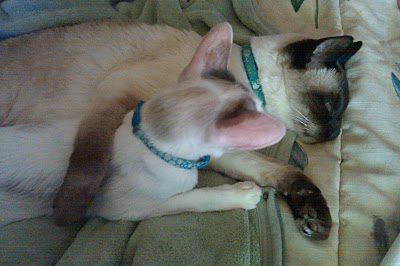 Well it was a good week.  Most cats knew I was in Alaska.  I suspect that is becuase most cats know that the Iditarod Trail is in Alaska.

Maobert found me first (though I know Simba was waiting to find me if no one else did).  Mao said, “You are in Seward, Alaska, at the mural painted in 2002 by Jon van Zyle. It is on the north side of the TelAlaska building on the corner of 4th Avenue and Jefferson Street.  TAKE THAT SMARTYPANTS ‘KAIKA!!!!!!!!!!!!!!!!”

Smartypants ‘Kaika added, “Chey is in the mural in Seward, AK. Mr. van Zyle’s mural depicts the start of the historic Iditarod Trail – the serum run in 1925, which brought anti-diptheria serum to the people of Nome. The modern Iditarod is based on that run.”  Which I think means he still knows more than Maobert.

Simba said, “So Mao and Kaika found you. Good. You say you are not near water, but if you wander around a little, you will find some. Resurrection Bay is at Seward. There is a campground right at water’s edge and the Alaska Sealife Center is there too. Check it out before you go home.”

My humans did check out the Sealife Center.  They stayed in Seward for the full day the cruise ship came in and the next day before leaving to drive to Anchorage to fly to Petersburg.   I liked the seabirds at the Sealife Center.  They were tasty, but the center did not much like me…  Seward was definitely one of the Woman’s favorite places. Actually the whole Kenai pennisula was one of her favorites.   It was less touristy, slightly cheaper and very lovely up there.