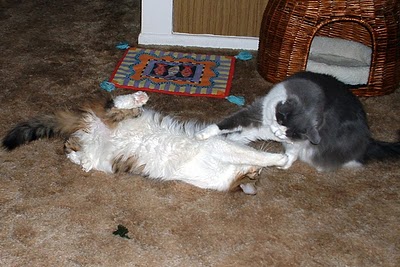 I was terribly excited and surprised when the first guess from Laila and Minchie only a short while after I posted was the correct one, “Could this be the press boxes at Safeco Field in Seattle, WA?”

Indeed they were correct.  We had thought they were correct thinking that the Cubs has just been playing the Mariners in Seattle so perhaps these Chicago cats were watching but no, they said, “Well, we know Chey lives near Seattle so we did a google search on press boxes and we figured it out from there. Was that cheating? We so seldom have a clue where you are and we stumbled on your blog late last night so we just had to guess.”

I’m not sure there is any such thing as cheating on Find Chey. I just want to be found!

Harry Spotter knew I was in a press box, but not where.   Parker got too excited to guess, “All I know was that you were in a box and I got very excited. I love boxes!”

Well, it’s time for me to tell the Male he is a LOSER.  The Reds lost all three games to the Mariners while they were here last weekend! HA!