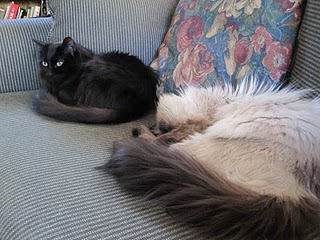 ‘Kaika, Jacqueline, and Simba all agreed. Simba added, “I think Cory has it right. I was going to guess Emerald Downs in Auburn WA too. Most racetracks don’t have hilly countryside nearby like that.”

Quasi said, “Next time you do this, can you give me some advance warning so I can place a bet with my bookie?”  So I shall have to work on that guys–I would have said something if I had known you all would bet on me–against all those horses!  WOW!

I did look for Snap but did not see her.  Ah well. I am certain she could have placed second (behind me!).

And no, the Woman and the Male did not win. The Woman got a really good win in one race. She actually picked the trifecta but didn’t BET the trifecta (just got in the single bets) so she was mad at herself for that!  That would have meant they broke even on their bets.

Now, that you haven’t lost all your money betting against me, go and spend your pennies for ML! She’s having a birthday!