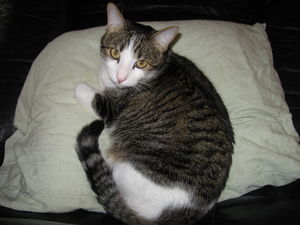 Well many cats were slowly honing in on where I was.  Eric and Flynn thought I was at Ballard Locks (and some day I might be as the Woman’s favorite restaurant, Ray’s Boathouse) is in Ballard and they go by the Locks.  Skeezix thought I was at Cascade Locks.  The Woman has been there too and she thought that was a very close guess, but that was not right.  I was visiting Cory (who once again sent the photo) and Cory said those were not the Locks I was on…and the Woman thought Cascade did look different.  Tripper thought it was the Dallas-Celilo Locks but was also incorrrect.  Simba made some guesses about the river and that the Locks started with a W.. but ‘Kaika was the first cat to find that I was at, “How about Willamette Falls Locks?” and added, “In West Linn, Oregon …”.

And yes, Simba, ‘Kaika WAS right!

Cory confirmed it and sent this link.  It talks about the Willamette Falls Locks in Oregon. The Woman has seen them from I 205 but never stopped to see them, see them.   It is getting close to the Holidays and so I have to be a bit closer to home.   For my regular readers, this might be a hint for where I’ll be NEXT Friday!

Daisy, maybe one of these days I will get to go to Pirates of the Caribbean. That would be a very fun place to visit.