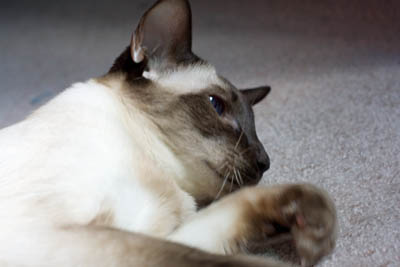 Recently reports have come in that Former Presidential Candidate Cheysuli has been making overtures to her arch enemy, The Male.   Cheysuli’s office has offered this official statement, “Reports that I have become friendly to the Male have been greatly exaggerated.”

Further reports state that Cheysuli has been observed snubbing the Male, as is her usual wont.

“It’s certainly possible she was in a place to let him pet her and didn’t realize how close she was,” said an inside source who shall remain named only “Gemini”.   “But I doubt it.  I think she is jealous that he likes me sometimes better because I don’t run away,” she continued off the record.

At any rate, Cheysuli and Gemini have a slightly better week this week, though the Woman continues to cover for the other practitioner, she will not be as busy on Thursday as she was this past week.  Further the following week, which is Christmas has her working only a half day on Tuesday and then her usual Wednesday afternoon, so the cats may actually get to visit with their friends as the holidays approach more closely.

“I do hope,” said Cheysuli, “That my friends who are celebrating Hanukkah are having a good one.”