Hide Search
You are here: Home / The Latest With Chey / We’re Back Wednesday 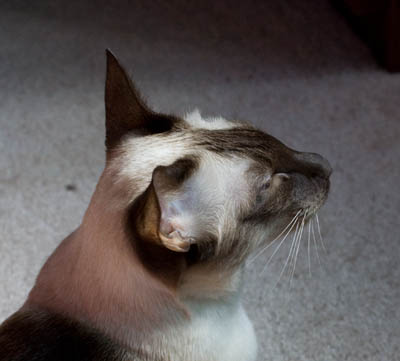 So I decided to play it coy at first. I didn’t let her touch me.  I made her feel bad.   Then when she invited me to roll on her side of the bed, I did so and let her touch me.  Then I purred.   But I made her beg first.  Gemini has no such pride.  She’s all over her the minute she comes home.

I hear she got to visit Laila and Minchie and Angel’s person although Laila had the good taste to ignore her for me.    I’ll remember you consideration, Laila.  It was nice of you.

The Woman went there to go to the annual Weston A Price Foundation Conference.   The Woman is really interested in the work of Dr. Price.   She is also curious to find out more about the work of Dr. Pottenger because he worked with cats.  However, not really in a good way.  Dr. Pottenger worked with cats and studied what happened when he fed a group of cats a species appropriate diet (we are true carnivores) versus a diet that was all processed foods.  The cats died out in three generations… hmm…

At any rate, Dr. Price was a dentist.  In the 1930’s he was concerned about all the dental problems he was seeing so he traveled the world to out of the way places where people still ate a traditional diet.  He didn’t find the same problems, although the same people who had access to modern diets (foods that were processed, although he called them displacement foods) would have all the problems we see in “modern” society–including tooth decay.

Dr. Price theorized that traditional diets were protective against those modern diseases we take as a given today.   He recommended cod liver oil (Blue Ice Fermented is the best with the most vitamins), lots of butter from grass fed cows (grain fed cows in confinement do not pass along all the good vitamin D), raw foods like raw milk and cream (even meats), meats with fats (traditional peoples would often ADD fat to their lean cuts), and if grains were involved then they always soaked them or sprouted them so that the anti nutrients that are found in grains would be gone.  Anyway, the Woman had GREAT food while she was there!

It looks like next year the conference will be in Valley Forge Pennsylvania.   If she can get CEUs again next year for the conference she hopes to go (and meet cat bloggers in that area too!).  As much as she liked the conference meeting Laila, Minchie and Angel’s person was a highlight.