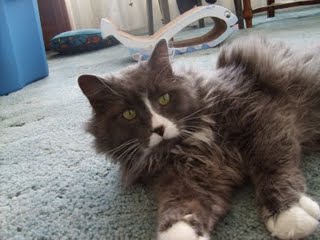 Well, ‘Kaika was the first to guess I was at the Washington Monument, although he offered a date a little on the late side.  Karen Jo came by and guessed 1959.   The Meezers came by later and guessed 1958 or 1959.   The date on the movie was that it was their honeymoon in 1959.

Ironically, the Woman actually watched the video on the November 7, 2009 which meant that it would have been their 50th anniversary.  Most Kitties who live in the US and would be familiar with the Washington Monument.  However, for those who missed it, it does look a bit different.  We found this photo on the image search and it comes from a similar angle but it looks quite different. In fact, the male and the Woman didn’t recognize the White House at first because the things around it had changed so much.

For those who guessed mid-1960s she laughed and appreciated that they thought she was so young!

‘Kaika and The Big Thing seemed to have a discussion about the years of the cars.   We have no way of verifying exactly which year it was.  The Grandparents certainly could have gone later on their honeymoon and just labelled the movies 1959, but the Woman doesn’t really think so.  She never heard that they waited.

I have to shout out that Simba‘s person was there within a year of this (so probably recognized things a bit better than younger cats) “n those days, so many people got married in June. So I will say late June- early July, 1958, on the Mall in Washington DC near the Washington Monument. My Mom was there then too!!”  Alas, the Woman’s folks got married in the fall…