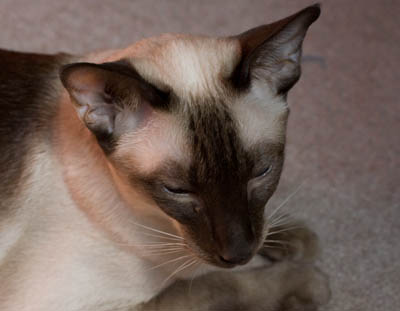 Attorney General Eric Holder is being petitioned by law enforcement across the country to drop the charges against Cheysuli.

The case has come to Holder’s attention due to the large numbers of cats that have been incarcerated.  While Federal Agents have extensive guidelines and photos, many agents are just picking up cats–any cats.

“You have no idea how many black and white cats, gray cats and even calico cats that they are picking up.  Some agents are very thorough, even going so far as to check for pink toe pads, which Cheysuli as a chocolate point Siamese has.  However many agents are just picking up anything with four legs.   We’ve got a pack of German Shepherds and a bunch of chihuahuas.  We even have a pot bellied pig being held.   Many locations are starting to try and weed out the candidates who are obviously not Cheysuli but it’s getting difficult. Jail space is at a premium right now.”

Ironically, in spite of all the searching no one has “the real Cheysuli” at this point.

“We really think that there was no intention to purposefully impersonate a blimp.  She had no name on her belly.   We can’t just go arresting cats for looking fat for no reason.    The credit card stealing doesn’t hold water either.   These charges were obviously trumped up to get the government involved.  There isn’t even any evidence linking Cheysuli to the whapped reporter a few years ago, except that the last story written was about her.   Still, there is no evidence to tie her to the whapping.   While she does have ties to Tony Soprano, she isn’t necessarily tied to any of his illegal activities.   You can’t arrest someone for knowing someone and it does appear that Tony has sought out Cheysuli on numerous occasions, not the other way around.”

The only charge that seems to stick is using her own home grown catnip.  “It’s not illegal to grow your own in the state of Washington,” said one spokesperson.   “It shouldn’t be illegal to do something with it either.”