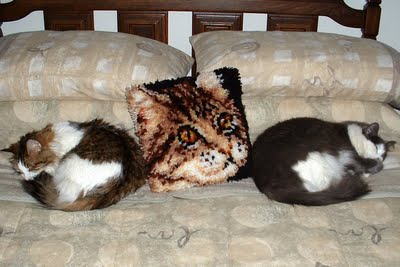 Well the Male suggested this photo (as you can see why it was terribly unoriginal).   However I decided I needed to challenge some cats.  Laila and Minchie were more than up to the challenge.  They said:

Is it the Round Barn Theatre at Amish Acres in Nappanee, IN?

LC, Ayla and Iza were a bit later with the response but they went so far as to add the link to Amish Acres:

OK, somekitties already got it. Round Barn Theater…

But we want to pathetically try ta get a little recognition by adding a link ta the place.http://amishacres.com/musical_theatre.html

Further, we will attempt to further our quest for recognition, so we want to thank “Your Majesty”, “almost President of the US”, and “Most perfect Meezer in the Universe” for considering this post for mentioning tamorrow. We will even consider a bribe (details to be werked out later)…

I, of course did not add this due to their buttering me up. That so doesn’t work with me (except on special occasions and any day that is not a special occasion–ham ALWAYS works as a bribe).

Daisy was going to say Old McDonald’s farm but it is actually the old Stahly-Nissley-Kuhns farm, so she is correct that she was not correct.

Several cats guessed Kewanee, IL but we are in Nappanee, IN.   There are many round barns in this area. Apparently round barns are easier to build than square ones.  Hmm..

Yes, this was another stop on the Woman’s all together too long trip to the MidWest earlier this year.   This was on the way back to Chicago so they could return home. Fortunately nothing happened to her here.  The Male was worried her foot would get stepped on by a horse. Fortunately the only thing that stepped on her foot was a small Canadian Woman.