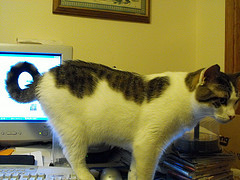 Well this week’s search was a tougher one than I thought. I knew Derby would find me once his human let him go searching but I knew someone else could come up with it if they were given a few hints. Whitey almost had it but Victor Tabbycat was the first with the real correct answer (and he wouldn’t have gotten it without Whitey’s almost correct guess).

Are you at the Pabst Brewery in Milwaukee? Probably not. :slinks away with tail dragging sadly behind:

However he should never have slunk away because he was the closest cat so far. I was not actually in the brewery though.

Reese was very correct to say that I was on the second floor. However, he was not quite correct because he did not know where the building was. It was an excellent answer however!

Derby of course had lots of good information:

Oh, I am here late but I still may be a winner. This is the Pabst Mansion that was home to Frederick Pabst, who had the brewery too. Mum has been there many years ago. http://www.pabstmansion.com/ for more information.

The nearby Univerisity is Marquette University.

And he is right. Marquette is not far at all from the Pabst Mansion. And Mr. Pabst who built the mansion also founded the Human Society in Milwaukee. So I think it is a good place for a cat. It has a fascinating history and it is restored inside and tours are given most days for a nominal fee to help the upkeep.

No those windows were not guillotines and I was not at the haunted mansion. I was hanging my head out waiting for a breeze and hoping that someone would come by and recognize me!