Hide Search
You are here: Home / The Latest With Chey / Cheysuli Continues to Be Hounded by the Press 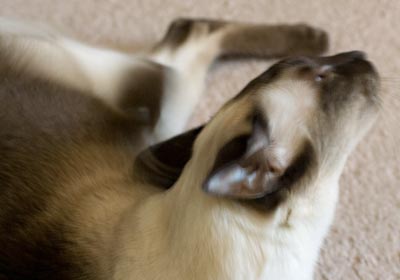 Frustrated by press rumors that she snores, Cheysuli has been kicking herself all weekend.

Rumors started shortly after arch nemesis, The Male, woke in the middle of the night and sleepily asked the Woman what was that?  The Woman answered in an intelligible mumble of “Hmm?”

“That singing,” the Male said.

The Woman leaned up and listened more closely and said, “That’s Cheysuli.”

At that point rumor mills had already started about the former candidate snoring.  Rather than picking up on the lovely sounding concept that Cheysuli SINGS as she sleeps, critics immediately latched on to the fact that she may snore.

“How could we have a leader or even a wanna be leader who snores?” said one unnamed source.  “After all, if she had been elected and fallen asleep on a foreign dignitary, imagine the scandal!”

“They need to stop imagining things.  Chey is a cat.  She’s EXPECTED to fall asleep on laps,” said one staunch supporter.  It appears that even well after the election, Cheysuli can get no rest from the press.