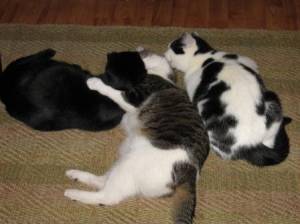 This week I was wandering around looking for patriotic places to go and I fell asleep where Dickens, Garfield, McKinley, JQ Adams, B. Harrison, Harding, Taft, W. Harrison, Grant, Van Buren, Reagan and Bush Jr. all slept… And then I forgot where I was. And guess what! ‘Kaika found me (again!)

I realized that we weren’t friends on Catster and immediately sought to remedy this. After all, if someone is going to keep finding me, we ought to be friends.

Eric and Flynn also knew and so did Parker (we know because Parker is from O hi O) and the Golden Lamb is there. Pixel and Samba also knew where we were. They said,

Kalka got it. the golden Lamb hotel in lebanon Ohio. It is the oldest hotel in ohio Established in 1850. And is suposedlu haunted. Chey be careful of ghosts

We are a day late and a Lamb short, as usual.

But just to say, the reason I went there is that I heard the Male took the Woman to dinner there. He insisted. Of course he went off to find another hotel (?). Apparently he was worried this one wouldn’t have high speed internet. At any rate, they had to eat there because he was a dishwasher there about 35 years ago. He worked there 2 and half summers as a dishwasher and he actually wanted to eat in the dining room, rather than in the kitchen.

I thought the dishes were much cleaner now…

At any rate, because it seems several of our cats don’t get to guess because we usually put our post up between 8 and 10 PDT, we are going to try setting the time frame to post Find Chey at different times. Sometimes we will post 8 to 10 PDT Thursday but others we will make it not post until midnight our time or perhaps as late as 8 AM Friday our time to be more fair to cats around the world. However I think the twitter function will say we posted even though we might not have it up yet. That’s a flaw in our twitter tool.