Hide Search
You are here: Home / The Latest With Chey / Cheysuli Refuses to Diet 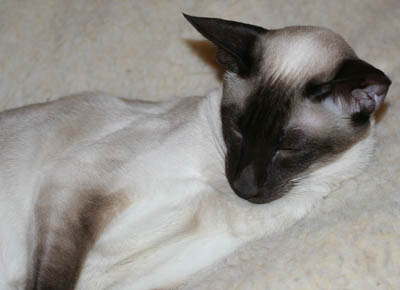 Refusing to give into peer pressure, Former Presidential Candidate Cheysuli says she will not be going on a diet.

Critics state that the latter part is probably not up to Cheysuli.  We all die.  Further as she further balloons up (look for our upcoming series on dirigibles) she will be shortening her life expectancy even further.

“Look, everyone blames the fat cat for being fat.   Have you ever thought to blame the human?  I mean do I have opposable thumbs? Do you think a tub like me could ever catch a mouse? Really.   My fat is not my fault.”

A spokesperson for Cheysuli’s humans said that Chey is fed only the finest organic cat food, formulated by one of the best pet food makers out there, Solid Gold.   Their other cats lost weight on this food. Cheysuli, however, continues to remain robust.