Hide Search
You are here: Home / The Latest With Chey / Photos that Should Not have Been Taken but are too Good to Pass Up

As manyof your humans know, my human has been having a horrible time in the latter part of her Midwest tour.  She calls it the Revenge of White Castle.  Certainly things were going just ducky, cheating on me with Little Isis, meeting those other cat’s humans (all of whom got extra cuddles when their people returned, I am sure…. I am STILL waiting), and eating far too much.

Then she went to White Castle and got sick.  Since then, it’s been a slippery slope.  She fell in Southern Indiana going to look at caves and may have broken her bum.  Yes, really.  She has checked into symptoms for broken sacrums and she pretty much as them.   Then, she entered Southern Ohio and her nose began running like Snoqualmie Falls at Flood level.  Finally her nose started to run a bit less.  She went a full hour without sneezing.   Then at the Reds game some guy slipped as he was getting upset in the 10th inning when the Reds managed to snatch defeat from the jaws of victory and when their batter was unsuccessful in bringing in the third base runner.   As he slipped his fist came down on the Woman’s head.

She left the game nauseaus, headachy and slightly dizzy.  At Urgency Care they gave her nothing.  They told her to not be alone for 24 hours… sigh.

So this photo then is the photo of this period of the trip.  For those sensitive cats, you may not want to look.   But I know you’ll look anyway, so I just want to say this photo is not what you think it is…

I’m just wasting space to leave some space here so that you don’t have to look if you don’t want to.

This is your last warning.  Really.  Really. Are you SURE you want to look?

And if you do look, you must keep reading. You can’t be all grossed out. 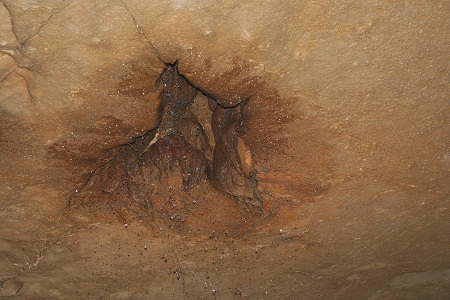 Anyway this is the original sinkhole that goes down into Marengo Cave in Southern Indiana.   The Woman walked through Marengo Cave with the Male AFTER she broke her bum because walking beat sitting.   She wanted a photo of where the two children originally entered the cave.  However, after viewing in picture viewer, she realized the photo didn’t quite do justice to the Sink Hole