Hide Search
You are here: Home / The Latest With Chey / Getting Ready 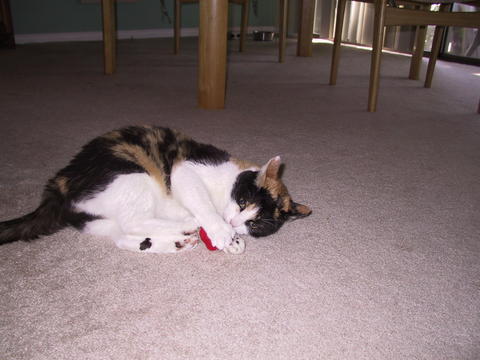 As most of you know, our Georgia cat has been ill for some time. Two and a half years ago she was diagnosed with a menigioma. Now that she has lived far past all expectations, they tell us it is vestibular disease. She has been in kidney failure and getting more frail since the first of the year. There was never any doubt that this time this Christmas and New Years would be her last.

As we have come up on June, and the humans are traveling soon, the Woman decided Georgia was just too confused to stay around. She plans to help her to the Rainbow Bridge this Friday if Georgia has not gone on her own. Last Thursday when we made the home vet visit, we thought that we might be cutting her life short by a few weeks. As of today we are not certain that she will live until Friday. In fact, we don’t know that she will make it through the night.

Georgia has been failing quite quickly and distinctly in the past weeks. She can hardly climb stairs and has to pause and rest when coming into a room. About the only thing she really wants to do any more is sit on the Woman’s lap. Two days ago, she was a bit confused about food. Last night she wouldn’t eat her canned food (but went for some of her favorite human food)

Georgia was there when our cat Ingold crossed the Bridge. On his own, as he wanted. He fought the whole time though. It was a fairly traumatic crossing for the Woman and for Georgia who watched from a few feet away. We have worried that she might not be going because she is afraid. As it happens, Mom Robyn has been writing on her blog a lot and she wrote an article on crystals and fear.

We wrote to her about fear of death and cats. Mom Robyn was between Mini feedings and replied promptly to us with a long list of useful crystals ( most were different from the ones in her article)

As it happened we had four and we created a little ritual to help Georgia cross the Bridge. We started with our large rose quartz, which will help with transition. It is also a stone associated with love, so the Woman placed it at her bottom saying this is at the root, that everything is done with love. We want you to transition because we love you and we want you to know that it is safe. There are those who love you on both sides who will help you.

Then the Woman placed a fossil at one side and said that we would remember her just like this critter was remember in this fossil. It is changed but still the same, just as she will always be in our hearts.

At Georgia’s head, the Woman placed Apache tears and said that these tears represented the tears we would shed when she was gone but that that it would be okay because she would be at a better place. She would be at a place she would be healed (placing the final stone at her side, the malachite) because we couldn’t heal her body here.

Then we came back to the rose quartz and reminded her this was only done in love. That we just wanted to be sure that she knew she was very loved and very safe and the choices were hers–we love her no matter what.