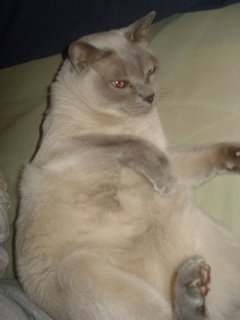 Well good job to the cats this week. I was out and about at the Boeing plant, trying to catch some of those airplanes. There are several Boeing plants in the area, one of which is in Renton and one in Everett. There’s also one in Kent and of course, Boeing Field. Derby was our first guesser and he guessed the plant in Everett, which wasn’t correct. This suggests that if you really really want to be the guest star you may not want to be too specific in your first guess!

Camie’s Kitties came along and said:

We agree that you are on a Boeing building, but we think it is in Renton, WA.

Yes they were right. I was thinking about purchasing the Woman something at the Fry’s that’s just down the road…

MommaCat and the Furry Purries were pretty specific, however I am on the building and not I405 or it’s exit. The camera was actually also off the exit and onto the road going past Boeing when I was caught on film!