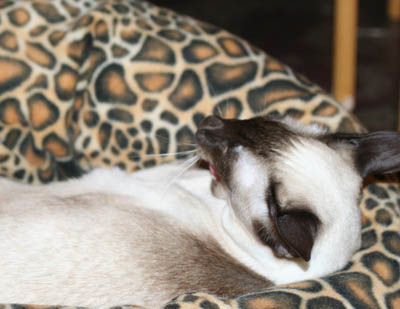 He he. They forgot Gemini’s birthday too! So I am laughing because the Woman is now 0 for 2.

Catster reminded her that Gemini’s birthday was listed as the 18th of April which is probably close, given her age when she was found. Of course the Woman doesn’t remember the exact date she got Gemini either, only that it was early May. The Iggy Cat crossed the Bridge shortly after the Woman returned from a seminar in late April, so she is thinking probably about April 27th or 28th. Whatever date, it was a Saturday. Ten days later we lost Simone, the Siamese Who Came Before. The day after that she heard Gemini and the day after that she found her and adopted her, so it was early May. She was probably five weeks old at the time.

Anyway I guess this means that the Little Puffalump Cat is no more special than I am! HA!

Well, time to break out the ham. I hear that this weekend the Male took the Woman to see CATS (because apparently watching me is not good enough) and then to a dinner of King Crab Legs in Seattle after the matinee. I saw no crab. I would think that Gemini should have at least gotten some seeing it was her birthday that was missed. I’m a good little food thief, but man, around here you really gotta watch out for Georgia. She’s taken food right out of my mouth when I’m getting a treat. Piglet.

Well, sadly, the Woman is preparing that we won’t have Georgia much longer. However this time she is certain. Georgia is wobbly and has a harder and harder time moving around so it is getting closer. The Woman says we might have to help her if she is still with us at the end of May because she doesn’t think she’ll survive the confusion of their trip in June if she is still around (and that is not certain at all).