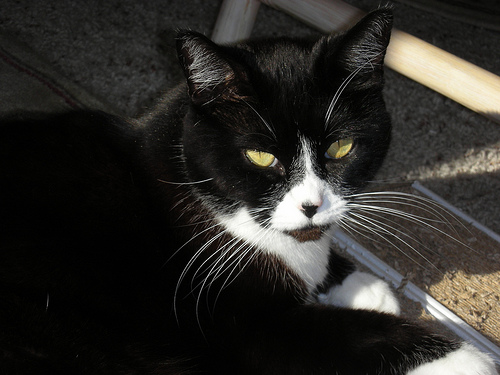 Well many many cats thought I was in Chicago, but Sophia got the first correct answer by saying:

Riley and Tiki and Alexi guessed that I was in Seattle near Pike’s Place Market. I am not too far, although the market should be to my left and on the hill which is blocked by the building.

Looks like you are down on a wharf at Elliott Bay. It’s been years since my mom lived in Seattle … the skyline has changed –a lot!

I think this is the best answer. Cory and Kaika were working on getting the exact pier but as the photo was taken about five years ago, the Woman doesn’t remember what pier she is on. She thinks they walked down past where the Ivar’s restaurant is on the pier (although she can’t remember for certain). It might be the next pier over. She is fairly certain they walked out there to watch a ferry taking off from the area to the right of where I am.

Fat Eric said he would have known if the Space Needle or Mt. Rainier were in the photo. I think even I would recognize where I was if I saw the Space Needle (but don’t expect a full on shot of that, although you might get some odd angles of it sometime!) but perhaps Mt. Rainier!

Eric and Flynn were thrown by the water. Seattle is actually situated on Puget Sound. One of the Woman’s favorite tourist attractions is the Seattle Underground. You go to the underground city and walk around with a guide. Why did they build the city up higher? Well it’s because of the tides. When the tides were in, water back flushed up the toilets because the water level was so high. Because residents didn’t like this for some reason, they built the city up higher–I believe about the second story as it goes down the hill towards the Sound. Of course, Eric and Flynn, given how much it rains here the idea that your humans didn’t see any water makes her chuckle…