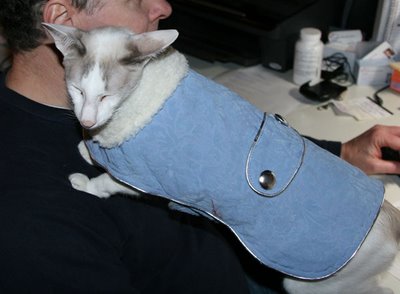 Well this is getting to be a habit isn’t it? Once again Skeezix found me first.

First, I want to apologize for those very early cats who couldn’t click on the photo to make bigger. Then I want to apologize for the pixilated photo in the larger size mode. Apparently WordPress or one of our plugins has changed how you can set things in the photo and we have to do a lot more by hand. Something trimmed our larger photo to the size we set for it to be in the post and then we weren’t able to make it bigger from there (like the original uploaded photo had been). So we had to DOWNLOAD the photo and enlarge it again because our photo editor is on the PC side of the computer and we were already back on the MAC side… so we couldn’t easily upload the photo a second time, but could only enlarge it. We are very sorry for that quality and hope it won’t happen again.

Chey, I beeleeve yer on Rapa Nui, otherwize known as Easter Island. I think this is the Tahai Ceremonial Complex looking south-southeast, with the Rano Kao peninsula in the upper left.

I promiss, I won’t play next week.

I would just ask Skeezix that you play perhaps on Saturday so that I have someone who wins each weekend and that you don’t get first prize all the time! 🙂 I am thinking that next weeks place may be a bit more challenging so even you might be challenged! It’s one of the most famous place names on earth but the landscape doesn’t have a lot of distinguishing features…that is your hint for next week all!

Kaika also knew where we were and also Gandalf and Grayson said they knew as well!

1. Skeezix should be banned from playing Find Chey Friday.
2. We are going to email you a “picture” to use; then we’ll finally know where you are.
3. OK, #2 would be cheating.
4. As for today’s picture: a beach is a beach is a b..ch

No Maggie and Zoey, sending us a photo of someplace you know would not be cheating. Of course we ask that you not guess! And we ask that all photos that you send us be yours to give us permission to use. We are trying not to just find places off the internet to use.  Also, we do not wish to ban Skeezix. SOMEONE has to find me!

How did we get this photo from Easter Island? Well after graduating from acupuncture school my human had to finish settling her father’s estate (he died while she was in school) and she needed some time off. She took a cruise around the tip of South America and they started in Santiago. After a huge amount of debate between visiting Easter Island or Machu Picchu for the pre cruise tour she decided upon Easter Island. Someone pointed out that she tends to get slow and tired at high altitudes which is what did it.

For those who didn’t read our comment response, this is the only moai with the eyes filled in. This was redone in modern times. All the statues had the eyes destroyed when they were tumbled.